These are the results no other marketer will share with you! For some time, marketers had only partial data on how the overall digital funnel and channels work together and were correct. But in this case study, with the help of one of our clients, we can better understand the mechanism of the following things.

For this case study, we compared 14 days period before lowering Facebook advertisement efforts to a minimum, during, and after – allocating Facebook again the initial budget amount. There wasn’t any major event within this period, and the year over year results for the past two years show a similar curve. In 2019, there was a reported decrease in results in the second half of March.

The following results will present several conclusions based on the reported numbers, including the client’s total revenues.

Facebook is an excellent channel to help spread the word about your brand and quickly target your desired audience. It offers several parts of the funnel, from the awareness building of your products to catalog promotion and dynamic conversion advertising. However, based on the following results, considering Facebook as a channel and the combination of Facebook and Google advertising, you can see how it plays a role in this whole ecosystem.

Reported multi-channel funnel results show a comparison between the impact of different channels on first and last interaction resulting in conversions.

The following chart shows that lacking Facebook promotion results in a decrease of all the results. The total amount spent on advertising decreased by 63%, yet the drop in total paid revenue was around 55%. Which is not that surprising, right?

However, the interesting impact of such action is seen in a channel we wouldn’t guess in the first place – Paid Search.

So how can Facebook advertising affect a paid search, you ask?

The reason is straightforward. Facebook optimizes for impressions by default and, as display advertising, can serve the ads to anyone without them proactively looking for more information.

Another reason is that Facebook can be used as a very effective tool for retargeting strategies. People who already visited the website are reminded of the content or product they have been browsing or viewing.

Therefore, with the ads turned off, people are not targeted based on their interests or demographics on a social media platform they spend most of their time on. The ones who were browsing the website are not reminded of the products or services.

That way, these potential converting customers are not reminded to search for the product or a brand because, essentially, they don’t see it on their social media feed.

The insight we get from the table above is that Facebook plays a significant part in the Top of the Funnel stage.

The table, as mentioned earlier, is a good source of information on different metrics in the reported period.

As seen before, the amount spent in three timeframes were different, resulting in different ratio of paid and total revenues. The evident part here is decreasing the social media promotion budget affects paid revenues.

For the note, Facebook still generates revenues even after few days as their attribution model works on a 7-days period, within which conversion can be credited to your account results.

Another exciting part about the influence of Facebook promotion on Google ads results lies in its impact on different channels.

Given that Facebook is the Top of The Funnel channel most of the time, it results in different parts of the digital ecosystem. We all know for sure that Facebook advertising is influencing your SEO efforts and serves in cross-channel tactics. But the importance of its linking to the results of paid and organic Google is something different. You can even find several articles online on the topic “Google Ads vs. Facebook ads,” but not many on “Facebook’s influence on Google search results,” whether paid or organic.

The actual data provided us an insightful understanding of the potential connection between these two advertising channels. 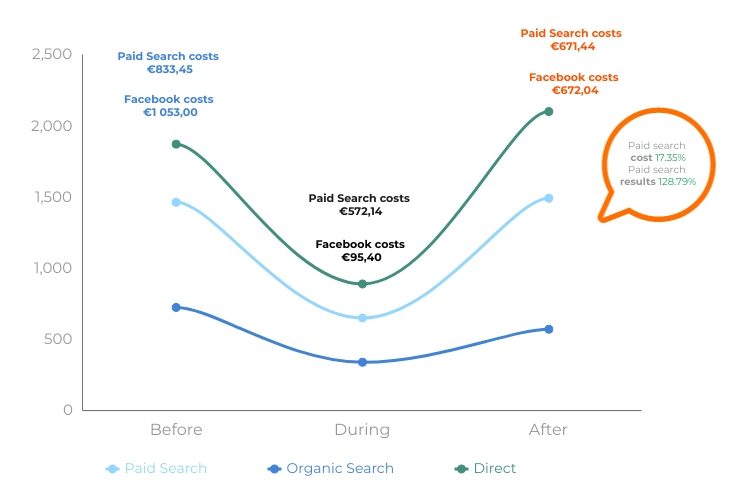 Along with the costs, we also checked the attribution of conversions in 14 days, which supports our thesis that Facebook promotion influences the funnel of paying customers.

The underlined percentages represent the increase of % change in conversions from the Last interaction in the First interaction. It is visible now that the percentage of conversions from paid search has changed in two weeks period where Facebook promotion was lowered to its minimum. Therefore the majority of the results had to come from Paid search.

This all is affected by an insufficient presence of Top of The Funnel channel Facebook advertising, which caused lacking brand awareness that was influencing all the subsequent advertising efforts.

Facebook influenced not only Google results, but the overall transactions experienced lower numbers than the previous period – the one without Facebook promotion.

Almost all other transactions have increased in the period with minimal focus on social media promotion. Still, an interesting situation occurred where Paid Facebook Transactions and Social Transactions decreased logically, but we can see a slight drop in Direct Transactions.

The following chart represents % of how each channel contributed to the total sales. Therefore the distribution between channels has changed while missing one channel in the Top of the Funnel. 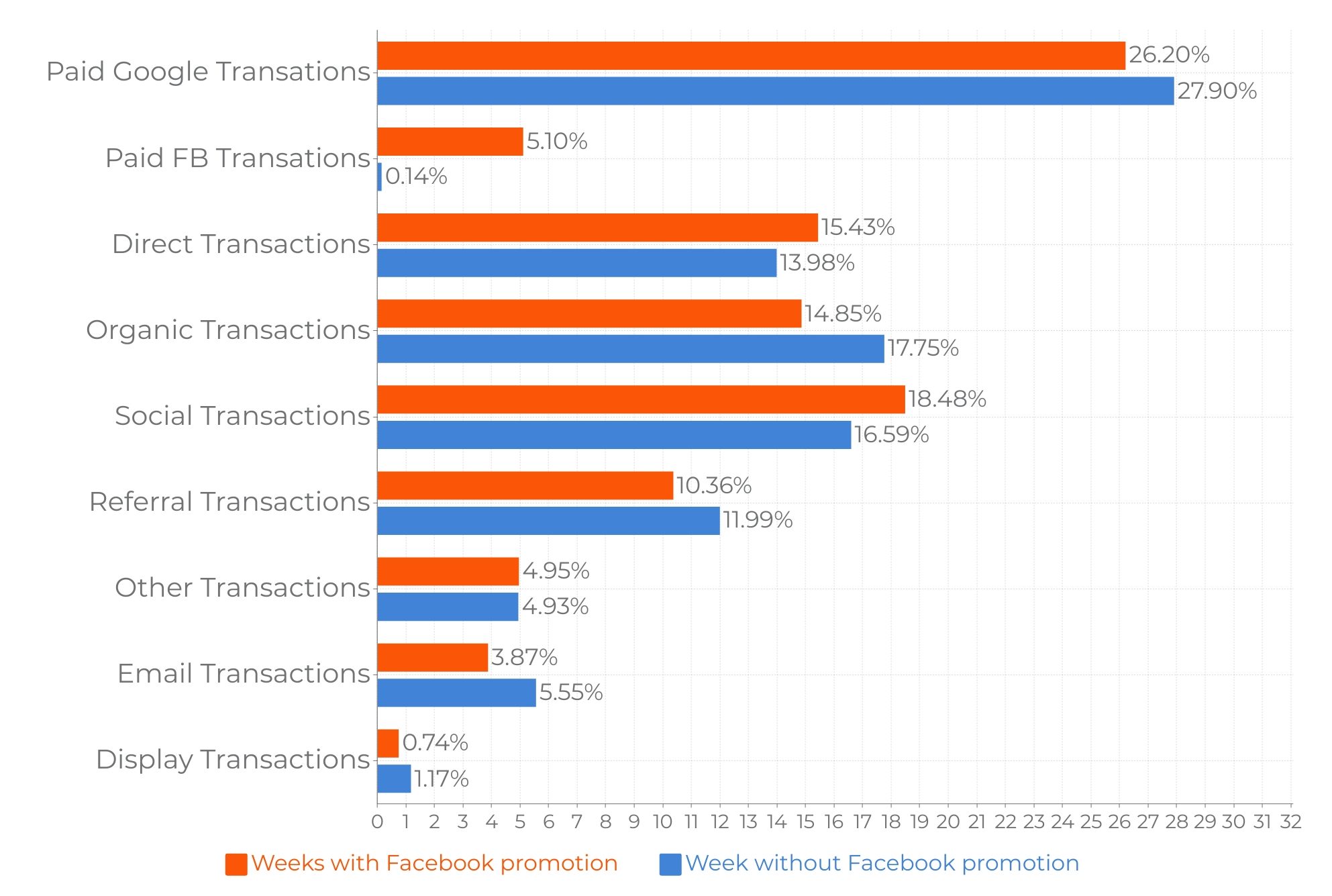 Our results have proven the importance of incorporating your Facebook advertising effort within the whole digital ecosystem because it gives you brand awareness, which, if lacking, results in higher costs of other platforms (in this case Google) and less effective sales.

We believe Boosterberg can be a suitable partner on this journey in Facebook advertising efforts. It takes some weight off your shoulders and helps you optimize your day-to-day activities. That way, you will have more time to intensely focus on the whole ecosystem and analytics, which, as seen above, provide you with insightful insights helping you win the customer. And what else are we here for?

With Boosterberg, Kremsa Digital was able to increase impressions by 66% while lowering the budget by 14%. This was enough to cover their costs as well as the cost of using Boosterberg. Read the entire
case study here.